The 45th WorldSkills spectacular in Russia came to a close at the Kazan Arena Stadium in August, with more than a quarter of a million people visiting throughout the six-day event. President Vladimir Putin was amongst attendees and saluted competitors for their skills and talent in his closing ceremony speech. 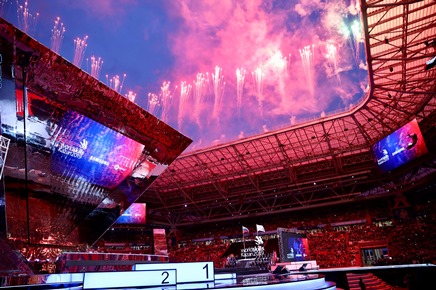 Competitors undertake a series of tests in a bid to take home one of the coveted medals. The competition presents gold, silver and bronze medals, plus a Medallion of Excellence for those who reach international standard in their chosen skill.

Team UK was awarded two gold, one silver, one bronze and 15 Medallions of Excellence, exceeding previous totals from WorldSkills 2017 and EuroSkills 2018.

Lewis Greenwood from York won a Medallion of Excellence for his work produced in the bricklaying category. When he first started working in construction, he never imagined it would take him across the world.

“It was a surreal experience,” says Lewis, “Walking into the opening ceremony was quite an overwhelming moment. I felt proud to be representing the country.”

Now back on familiar ground, Lewis is keen to get stuck into work again. Having recently completed his apprenticeship, he will return to PDS Construction as a fully qualified bricklayer.

Lewis plans to work hard for the company and demonstrate his appreciation for their continual support throughout the contest.

“Then I’d like to have my own building company in property development,” Lewis adds, “I’d like to buy a house and renovate it - the more derelict, the better!”

Wall and Floor Tiling Apprentice, Mark Scott from Glasgow, also took home a Medallion of Excellence but says he hasn’t quite finished his work with WorldSkills, just yet.

“I’m going to be coaching other trainees coming up in November for the next cycle,” says Mark, “It’s nice to pass those experiences onto others going through the same situation.”

Going up against global talent requires a rigorous training schedule and months of preparation. Before participating in WorldSkills, competitors must achieve in regional and national competitions to earn a place in Team UK. 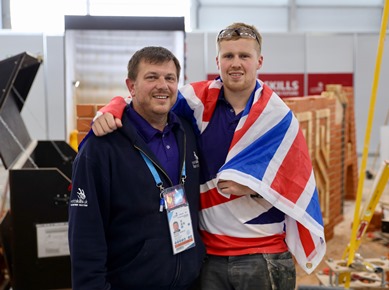 “It’s a complete rollercoaster because of the training and hard work you put into it,” says Mark, “But it does pay off.”

Christopher Caine from Haverfordwest often found himself helping on his dad’s renovation projects when he was growing up. Back then, he never envisioned winning a Medallion of Excellence for his joinery skills.

“My highlight was being awarded the medallion,” says Christopher, “It proved that I am at the high standard of the competition so it felt really rewarding.”

Entrants for WorldSkills 2021 are now preparing to showcase their talent at the UK National Finals, with the aim of progressing into Squad UK and competing at international level.

For those considering entering the prestigious event in the future, Christopher says, “I would tell them to go for it!” He adds, “You don’t have to go to university to be at the top of your skill; if you’re good at what you do and you’re passionate about it, you’ll succeed.”

Join us for WorldSkills UK Live 21 – 23 November 2019, where the UK National Finals will take place at the NEC Birmingham. Register here!