It’s been great getting out and about after the pandemic restrictions we’ve endured over the last two years.

Travelling to meet colleagues and industry partners has been refreshing.

It’s been inspiring, too, as I found during my visit to Leicester Construction Hub, co-funded by CITB through our Onsite Experience commission.

The hub, where construction recruits can acquire work-ready skills, is an example of one of my themes since joining CITB: the power of partnerships.

The hub was launched in February and will provide training and job opportunities for approximately 400 people in two years. Its location, at the heart of the Ashton Green regeneration project, is a terrific spot as housing, prison, railway, hospital, as well as Leicester City FC’s stadium development, are all nearby projects in the pipeline.

CITB has invested over half-a-million pounds in the new hub. Leicester City Council, who are leading the project, have contributed £300K of capital funding. Futures, which specialises in work for 18 to 25-year-olds, is also contributing over £100k to the project.

The hub is a good example of partners investing in people and skills for the benefit of the community, UK construction and our economy.

When I visited the hub last week the enthusiasm of trainees and employers was tremendous.

The hub has already supported over 40 people into work and training. It was good seeing local employers during my visit: A R Demolition, C R Civil Engineering and Danaher & Walsh.

Simon Pipkin of RJH Building Construction Ltd, told the Leicester City Council website that the scheme “has been incredibly beneficial” to his firm.

He said: “The skills hub team has an understanding of our business needs. We’ve given a start to five local people from the hub so far. Three of those have joined our company long-term through on-the-job training or an apprenticeship. We expect to have openings for more in 2022.”

Meanwhile Rupert Perkins, MD of John Perkins Construction was, like me, very impressed by the people he met. After his visit he spoke to CITB Commissioner Rohan Cheriyan and said: “There was a mix of tutors, supportive employers and two young people who compellingly told us how they had benefited from the hub”.

Simon and Rupert’s comments are encouraging as CITB plans to support 1,500 people through hubs in England and Wales this year.

Since I joined CITB I’ve been clear that we cannot solve all the skills challenges faced by industry. CITB is one of many players in the skills arena.

The onsite hubs, which aim to build on the success of the Construction Skills Fund, are one of several partnership projects CITB is involved in. In fact, we’ve made a series of partnership announcements in the last month.

A few weeks ago we launched a collaborative digital skills guide for small businesses in Scotland.

Last week we announced funding support for the Finishes and Interiors Sector’s BuildBack programme, a recruitment and induction solution for much-needed dry liners.

And next week I’ll be in Wales, at HMP Berwyn, to highlight an inspiring collaborative project which will offer prison leavers a fresh start in life via a construction career.

The construction industry has a reputation for working in silos, for a lack of collaboration. This is understandable given the fragmented nature of the sector.

However, to close the skills gap working together is essential. This is why I’m encouraged by our partnership projects, the hard work of my colleagues and the enthusiasm shown by students.

I’ll keep you updated on how we create skills and jobs for the future. As the saying goes, teamwork makes the dream work. 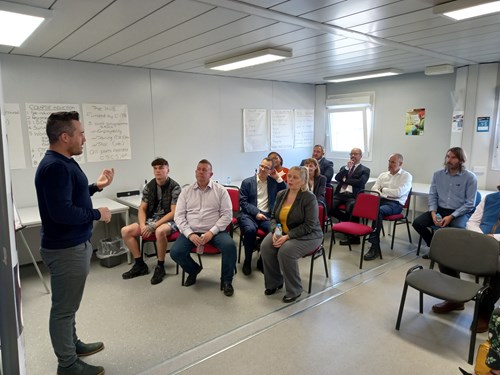