How Covid and Carillion can't stop this apprentice

It’s been more than two years since construction giant, Carillion, ceased trading, affecting around 1400 apprentices. To minimise the impact of the crisis for its learners, CITB swiftly set up a project team to ensure support was provided.

Among the 1,016 apprentices CITB helped back into employment was bricklaying apprentice, Billy Nuttall from Bristol. Just six months away from completing his level 2 apprenticeship, he suddenly found himself looking for a new employer. Billy is an example of the many that stepped up to the plate during the upheaval and, with an unwavering positive spirit, has since come a long way with his career in construction.

“Obviously I wasn’t happy to hear the news as I had to start my work all over again, but I wasn’t too worried to be honest because CITB was really quick to help us out,” says 20-year-old Billy.

Instead of casting blame or giving up, Billy pushed himself even harder and became the first to complete his apprenticeship from his new group in August 2019. Billy’s optimism and can-do approach particularly shone through when it came to attending a new college.

“My new college was more intense, meaning I had to push myself harder to catch up and meet the standards. I didn’t find it too bad though - I had lots of help to get through it.”

Billy’s determination to succeed, despite the difficult circumstances, was apparent in his punctuality and good work ethic, which were always noted by those around him.

His college assessor, Patrick Lune, reflects, “Billy always responded to texts and emails quickly and kept us informed of developments on site. In the short time that I worked with him, I watched his skills develop as he became a competent bricklayer.” 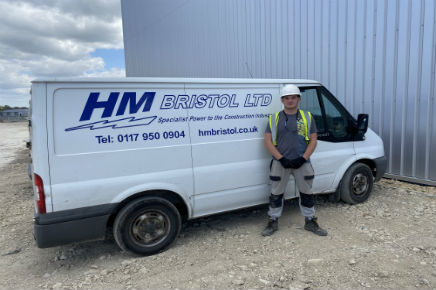 With a curiosity to learn more about the industry and a willingness to help, Billy would often spend extra time with his supervisor, enabling him access to a wider variety of tasks. This was influential in his decision to broaden his skills base and move his career onto a different path, upon completing his apprenticeship.

“I decided to take on a level 3 electrician apprenticeship, which started in September last year,” says Billy. “It will take me four years to complete but it’s something I’d like to pursue long-term, as I can see wider work opportunities in this field.” He adds, “It also means I’ll be working indoors!”

No one could have guessed that an even bigger crisis in the form of Covid-19 was around the corner, set to change life as we knew it. Billy was no exception and once again found himself out of work for a period, being placed on the furlough scheme for 10 weeks. But even in uncharted territory, he managed to find the bright side.

“We’ve been really lucky that we’ve had such lovely weather, I’ve been able to enjoy some time in the garden with my parents,” says Billy. “I struggled not being able to go out anywhere but it has meant that I’ve been able to save so much over the last few months.”

Thankfully Billy returned to work, and landed in the midst of one of the most critical construction projects at that time.

“When I went back, I started work on building one of the Covid-19 hospitals, the Exeter Nightingale - it was an amazing experience!” Billy adds, “We had to work fast so it was long hours but everyone mucked in to help.”

Despite college closures, Billy was able to keep up with his coursework during lockdown and is relieved to finally have his first year behind him. With three more years to go, he now looks ahead to a taste of normality when his college doors reopen this month.

View our Urgent Messages to discover the measures CITB has taken to support apprentices and their employers during Covid-19.